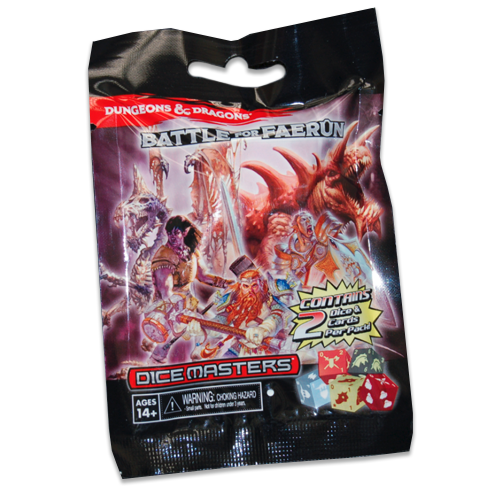 Dungeons & Dragons Dice Masters: Battle for Faerûn is a game that utilizes WizKids Games' proprietary Dice Building Game platform in which two players take the role of warlords, collect and assemble their "party" of adventurer dice and battle in head-to-head gameplay. Each turn, players roll the dice to see what resources they have available, buy dice, send their party members into the field, and then strike at the enemy warlord. There are multiple cards available for each type of die so players get to choose which one to use. This lets players specialize dice to suit play style.

Additional cards and dice to expand your collection can be found in expansion packs. Each Foil Pack contains two cards and two dice that players can add to their Dice Masters Battle for Faerûn collections. Players can create teams of their favorite fantasy characters from the Forgotten Realms universe. You can expect to see some of the most recognizable monsters and characters, such as Kobolds, Beholders, Mindflayers, Dragons, Drow, and many more!