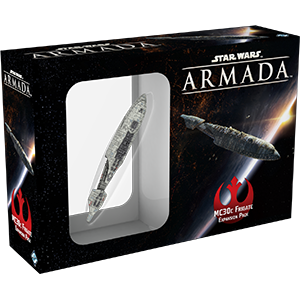 In addition to its pre-painted MC30c frigate miniature, this expansion pack contains two command dials and ten upgrade cards, along with all the tokens you need to bring this Rebel ship to battle. Of course, as with other Armada expansion packs, the MC30c Frigate Expansion Pack also comes with two ship cards that let you field your MC30c as either the MC30c Scout Frigate or MC30c Torpedo Frigate. Though they share many of the same design elements, the different costs and battery armaments of these two different configurations ensure a wide range of tactical flexibility for your MC30c.