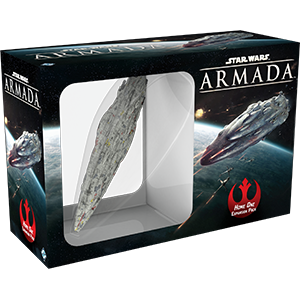 Boasting battery armaments of six dice from both its left and right hull zones, the MC80 star cruiser is as hard-hitting as a Victory-class Star Destroyer and the Rebellion's best answer to the Imperial-class Star Destroyer. Better yet, this Mon Calamari starship is even more powerful when flown under the command of Admiral Ackbar, who can add two red attack dice to any attack made by a starship that fires only from its left and right hull zones during its activation.

Will you race your star cruiser boldly down the middle of the Imperial fleet, firing at enemy ships on both sides? Will you dare your opponent to allow you the use of the Advanced Gunnery objective? Or will you circle the Imperial fleet at a distance, taking shots from a battery armament enhanced by Admiral Ackbar, Slaved Turrets, and the Defiance title? No matter how you bring it to battle, the MC80 star cruiser gives you the muscle to employ a whole new set of tactics in your battles for galactic freedom.